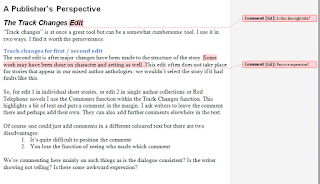 “Track changes” is at once a great tool but can be a somewhat cumbersome tool. I use it in two ways. I find it worth the perseverance.

The second edit is after major changes have been made to the structure of the story. Some work may have been done on character and setting as well. This edit often does not take place for stories that appear in our mixed author anthologies: we wouldn’t select the story if it had faults like this.

So, for edit 1 in individual short stories, or edit 2 in single author collections or Red Telephone novels I use the Comments function within the Track Changes function. This highlights a bit of text and puts a comment in the margin. I ask writers to leave the comment there and perhaps add their own. They can also add further comments elsewhere in the text.

Of course one could just add comments in a different coloured text but there are two disadvantages:
1.      It’s quite difficult to position the comment
2.      You lose the function of seeing who made which comment

We’re commenting here mainly on such things as is the dialogue consistent? Is the writer showing not telling? Is there some awkward expression?

We now use the full function of Track Changes but work with it not showing the changes and urge writers to read not allowing the mark-up to show. A marked up text is very confusing and I personally find it to difficult to know what I’m writing when I can see all of the changes.

We’re picking up here odd things we’ve missed in the previous edit. Or it may be that an attempted alteration has not quite worked – e.g. the writer may have added new text but not deleted the previous version. We might need to adjust something to fit our house-style e.g. We like hyphens and we put thoughts in italics. Or it just might be that an odd bit of dialogue has been set out wrongly. We don’t change anything major at this point.

Naturally, we’re not infallible. If something seems completely wrong, the writer can turn the mark-up on and reject that change. They can also make other changes for the editor to approve.

Once all changes are approved the text is ready for the next stage. This may sound like a lot of toing and froing but in fact it’s usually all accomplished in one exchange.

Track Changes is as good as its word: it keeps track of all the changes until they’re approved. It’s difficult to achieve this another way.

Note, the text will have three more proof reads but that’s a story for another day.