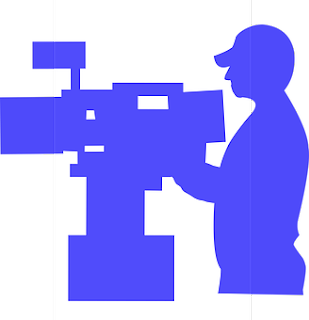 It is actually quite rare to be invited to talk on television, even local or very local, unless you're very well-known or are doing something controversial.

I once invited a children's writer to come and talk to my students at the university. She immediately attracted a lot of attention. The university's TV crew came to film and interview her. They chose a spot near a fountain just off the busy A6. It was also a windy day. Fortunately, perhaps, the interview couldn't be heard at all. Not that there was anything wrong with the writer. She is excellent and writes everything form picture books up to young adult texts.

So, why all of this interest? Well, her latest book at the time was a story about three girls who become prostitutes. I always argue that it's a very moral book because it ends badly and gives the message clearly "Girls, don't go there." However, it was enough to get her banned from one school and appear on the BBC local news. She had warned the librarian that she might not want to include this book in a school visit. Knee-jerk reaction was to pull all of her books out of the school library -  and she writes about seal pups being saved and feral kittens in the Med region finding homes – as well as prostitutes. The school said there were technical reasons why they were cancelling the visit. I don't think so.

Now, I'm not suggesting you go to those lengths to secure an interview. Yes, she did manage to get on to the BBC but her visit to my place of work only attracted a very local TV company. Anyway, it wasn't deliberate. It's still worth sending your carefully crafted press release to TV companies. Can you find that unique selling point? Does your work tie in with something important going on locally?

Should you then be invited to appear in a show, you'll need some preparation for this. Think about what to wear . What are your best colours? Avoid stripes, spots and intricate patterns. Practise. Get a friend to ask you questions and record yourself answering them. Is your voice warm enough and clear enough? Do your eyes smile?

An alternative way of being seen

If TV work really appeals and you're getting no take up from TV companies you can always make your own video and load it up to You Tube. Then, take as many opportunities as you can to embed it in web sites.
Posted by Gill James at 09:00